- April 30, 2018
This blog post is devoted to exploring technotheism, one of the three prominent branches of theology in Prison Break and the Unholy Trinity series. 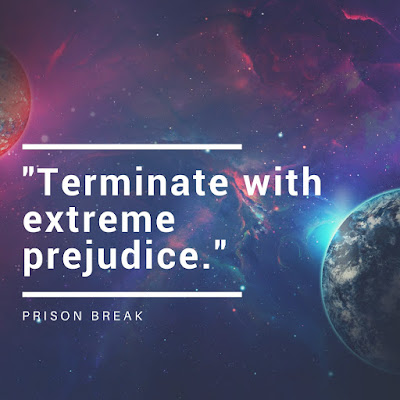 A technotheist is a practitioner of one of the major strains of technotheism -- a branch of theology that posits that the pursuit of better, purer technology is either the path to divinity or the source of divinity. As with either of the other two branches of the Unholy Trinity, there's plenty of division among technotheists; but on one thing, they can agree: technology is the next step on the path to human evolution, whether traversing that path or reaching an endpoint is the goal.

So aside from seeing technological pursuits as a good in and of themselves, what do the technotheists get up to? A lot. They're the source of most of the Union's technological advances. They abhor the old ways (they're very much in the tablet rather than paper book camp!). They develop incredible weapons and weapon systems.

Weapon systems like the Metal Men that Agata and Edlin meet in Prison Break.

We reached it, and I was wrestling with the mechanism when the first Metal Man came into view. It was a thing of both beauty and terror, sleek and humanoid, standing about the height of a man but equipped with a variety of appendages – all presumably to inflict hurt on people like us. It moved rapidly, but had gone absolutely silent, into some kind of stealth mode.

The Metal Men are animatronic police units, humanoid in appearance but equipped with a wide array of weaponry. They're cold, merciless killing machines, portable arsenals operated by artificial intelligence. They are bad news with a capital 'b'.

We don't spend a lot of time with them in Prison Break, but we will see them again in Judas Kiss.

Have a question you'd like me to answer? Want to know more about Prison Break or the Unholy Trinity series? Leave a question in the comments. It may end up being answered in a future blogpost!