Discuss the story: from what denomination is Falgir ?

- August 01, 2018
This blog post is devoted to Edlin Falgir's beliefs, particularly the branch of monotheism to which he belongs. 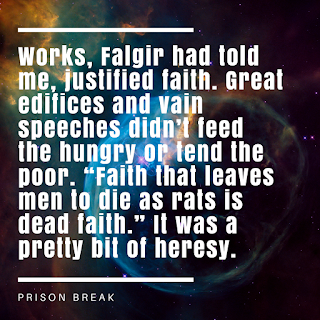 The short answer is, a Christian denomination that has yet to come into existence (ie I made it up). I draw on Catholic teachings, with a little bit of the independent nature of some protestant sects for the main framework of his faith. It doesn't arise in Prison Break, but I would envision some of the symbolism and mysticism of the Orthodox church in Edlin's approach.

The focus on works is a cornerstone of Edlin's philosophy - that, through works, his faith is justified. He does not adhere to rigid hierarchies of leadership, nor is he dogmatic. He sees faith, properly practiced, as a vehicle for good, but he does not demand that others adhere to his beliefs. Belief is a way for him to understand and make sense of the world.

He believes in God, but doesn't pretend to have all the answers.